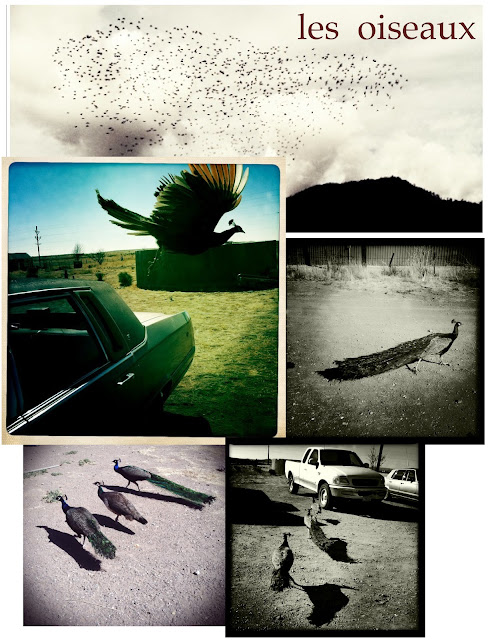 P E A F O W L
should be the name of this post. ( that encompassses peacocks & peahens)
i began with a few images of white swans in canals in france and the netherlands ( hence the title : les oiseaux, french for birds) and ended up here.
my inspiration started with this big nor' easter white - out snow storm which led me to images of white swans....and then to bird swarms in the dunes of wassenaar, NL and then to these peacocks in marfa. hmmm...i know, seems a bit strange  but its the process of going over ones photographs and getting re-inspired by them.
these peacocks live on a quasi-ranch on the outskirts of town with a posse of chickens and outdoor cats. they tend to wander and also have been attacked by neighboring dogs. they stick to themselves, can endure quite cold temps and love to roost. whenever we drove up to our friends house, they were inevitably  perched on top of their pickup or cadillac ( which my car obsessed husband insist they buy second hand)


i spent an entire winter trying to sneak up  and capture a great photograph of these beatiful creatures but they were always so ellusive and fast. finally, i did get the one shot of the peacock in flight off of the old caddilac. it was my "coup d'etat." i think after that i gave up....